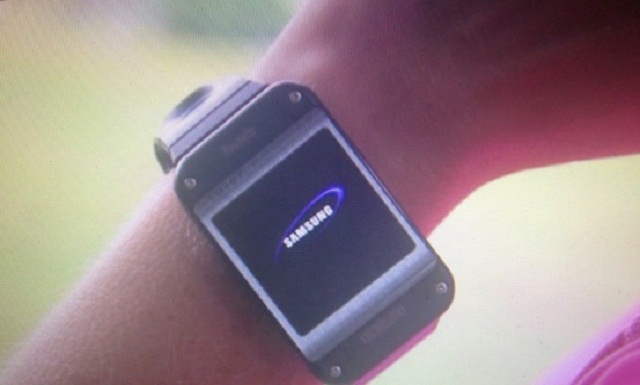 Samsung Introduces Its Galaxy Gear Smartwatch within a Few Days

Samsung is expected to introduce its first smart watch within a few days. Galaxy Gear is a watch from a new generation and offers most of the features of our smartphones. Samsung’s smartwatch is one of the most expected gadgets at the IFA trade show 2013 in Berlin. September 4th is the officially confirmed launch date. Introducing their product at the IFA, Samsung are way ahead of Apple’s iWatch gadget.
Just a few days before the world has seen Samsung’s creation we came across a picture of it, published by VentureBeat. Galaxy Gear will run on a dual-core 1.5GHz Exynos 4212 processor with a Mali-400 MP4 GPU. The device will allow you to check your mail, take pictures with a 4MP camera or update your Facebook status on the go. It offers a 2.5-inch display with Samsung’s OLED technology. The smartwatch will quickly connect and share contents via Bluetooth 4 and will also support the much popular NFC technology.
Galaxy Gear will also be able to recognize your voice thanks to the S Voice service we already know very well from the Galaxy smartphones. The intelligent watch will come with Android’s Jelly Bean 4.3 platform.
Of course Samsung doesn’t fail to turn the smartwatch into a stylish accessory to your everyday outfit. Galaxy Gear will come in a few colors: these are black, white, grey, orange and gold.

Vostro 3560 Is a Powerful Office Professional by Dell