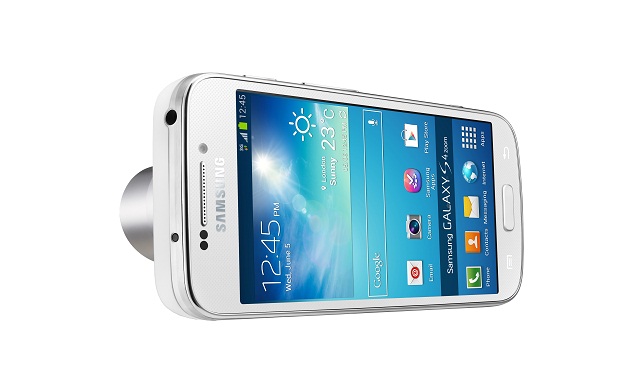 Yesterday (12.06.2013) in London, UK Samsung announced its latest phone – the Galaxy S4 Zoom. Both inside and outside the latest member of this numerous family is one revolutionary gadget – a representation of a symbiosis between a smartphone and a digital camera. We would call this one a two-faced hybrid. This is exactly one of those gadgets you instantly fall in love with or just the opposite – you find too awkward and weird to use.

Android Jelly Bean 4.2 is the platform on board of the Galaxy Zoom

The smartphone side on the front offers a 4.3-inch SUPER AMOLED display at 540×960 pixel resolution. It is well protected by the 3rd generation Gorilla Glass protection we also had in the S4. Android Jelly Bean 4.2 is the platform on board of the Galaxy Zoom. The device is powered by a dual-core 1.5GHz processor inside and uses 1.5GB of system memory. It is a little less powerful than the flagship of the family but most of the new features which the Galaxy S4 introduced to the world are present here like the S Translator, Group Play and many more. Being a camera phone the 8GB (5GB user-available) of storage seem quite insufficient for photography enthusiasts to store their photos and videos. They will be able to use more storage with an SD card.

On the back of the smartphone there is a point and shoot camera – a full sized one. Pretty revolutionary! The camera of the Galaxy Zoom device boosts high 16MP quality on the CMOS Sensor inside, but more importantly, it is loaded with big 10x optical zoom. The 24-240 mm lens offers an aperture range of f/3.1 to f6.3 and is optically stabilized to deliver sharp and crisp images. It is also expected to perform excellent in low light because of the powerful Xenon flash. The ISO level varies from 100 to 3200. Samsung Galaxy Zoom is also able to record FullHD videos. In other words, it is a fully capable digital camera on the back of a smarphone.
All smartphone cameras have so far been capable of zooming in and out but digitally. This is an entirely electronic process, implemented simply by cropping a part of the picture and interpolating the pixels. This portion of the image is then recreated and magnified which results in reducing the overall picture quality. On the contrary, the optical zoom on the S4 Zoom is related to mechanical movement inside the lens in order to shift the focal length by changing the ratios of internal lenses. The second process is much more complex but it doesn’t sacrifice the quality.

In other words the resolution of the zoomed image remains the same. This will be the main advantage of what apparently will be the best camera phone at the moment.
Hooking up a whole camera on the back of a smartphone, Samsung has definitely sacrificed the thin and light design of the Galaxy S4. Putting a telelens on a smarphone is certainly something yet unseen but so is a man walking down the street with a camera on their ear.
A video call front camera is also provided, it has 1.9MP quality. As both a big display smartphone and a point and shoot camera need a lot of power supply Samsung provided their smartphone-camera hybrid with a high capacity 2330 mAh battery piece.
Stay tuned for more information and a full detailed review of the Samsung Galaxy Zoom.

HTC Desire X – What Is Not to Desire about It?